This, the final week but certainly not the final frontier, is a significant marker. Just as our cohort begins to jel and as we gain a familiarity with this new frame as doctoral students, our intensive summer comes to an abrupt end.

Sure, we will all be glad to return to what has been the primary focus of our lives: our jobs and families. Yet, we have started something here, and like all committed and passionate folks, it’s hard to leave midstream. Yes, we will be back together at the end of September, and yes, we have a vast array of assignments to complete for this summer and for the upcoming fall semester. There is plenty to read, research, write, contemplate. I have just fully appreciated this space to learn, reflect, synthesize, and develop as an educator and human being. We are among such dedicated, intelligent, and diverse folks here at Teachers College and in our Urban Education Leaders Program.
After five weeks of intense scrutiny and reflection, I find that I am further along the path but still my sights remain squarely set on equity, race, opportunity, language, leadership, and advocacy. No one issue has emerged as MY issue, but I’m deeply committed to addressing the root causes of inequity and continuing to seek out solutions to the very real consequences of our current dropout crisis and school-to-prison pipeline in American urban school systems. I would like to find a way to link this uniquely American experience to a more globalized movement to fight oppression and the resulting poverty and marginalization through youth activism and media experimentation. I have some initial ideas on this kind of project, but first and foremost, I need to focus myself where I truly know the most: American inequity.
In some ways, I would like to stay in this stasis of summer–pondering and experimenting intellectually and indefinitely. I have to admit though I’m looking forward to the next steps of action, of some sort of job, and of more fully putting theory into practice. 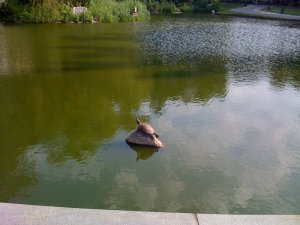 I wonder on days like today just how much capacity human beings have. I think we see ourselves, our abilities, and our output as substantially fixed. Afterall, we all have seen our own limits. We need a certain number of hours sleep, companionship, food, the newspaper, some form of media and entertainment to sustain us as we move forward in this life. In our relationships and in our work, we push boundaries, but ultimately we accept that there are boundaries up against which we continue to push.

Consider these human limits and perceived (and tangible) boundaries as the turtle’s shell. The shell confines almost the entirety of the turtle’s body. For the most part, the turtle is defined by this physical shell and by the perceived and tangible dangers outside the shell. This is natural.
This morning as I was passing through Morningside Park on my walk to school, I noticed this turtle sitting triumphantly on this pond rock boldly sunning himself in the middle of the city. All extremities exposed to the world, the turtle confidently and easily sat atop this city rock in this city park. I had to stop and take notice. This was out of the ordinary. In fact I took a picture to capture the moment.
This afternoon during our final sessions in our School Law Institute, I was so emotionally overwhelmed by the words of one of our speakers that I had to leave my seat. In fact I left the building. A complete stranger came up to me on the street and asked if I was alright and was so concerned she was very reluctant to leave me in such a state to return to her life. I was struck by the intensity of a series of moments where a professor who had dedicated his life’s work to the fight for equity in schools fought through the physical tremors of Parkinson’s to communicate to a group of 70 Teachers College students that it was our moment to take up this work. He could no longer continue. He spoke with humor and through a quivering, weak voice that betrayed the wit and sharpness of his intellect and richness of his experience. He struggled there before us, perched on the uncertain and steep decline of the human condition, and he was so utterly present in that moment, in each of 60 moments that he shared his wisdom and wit with us. He struggled with every inch of his body to reach us, and the intensity of that vulnerability and the tenderness of sharing that with 70 strangers reached deep inside of me. In a month of transformation and intense learning, he took this experience to an entirely new depth.
No one in that room left the same. I am sure of this. I am still struggling to understand the capacity of someone so willing and able to live so much in the present moment even as the simplest functions retreat from the brain’s command. How do you persist and persist with grace and good humor and with purpose even as you reach your most vulnerable state of life? I admire the willingness, the presence of mind, the sense of purpose, and the unyielding commitment to actualizing justice and equity for the most marginalized of people living among us. It is the fight for what is right alongside the fight for the simplest functions of life. I would be so lucky to live as much in this life the amount this professor lived in the 60 minutes he spent with us this

afternoon.
As I walked home tonight through Morningside park, I saw the turtle again. He was out on the same rock. He was there in the sun, hundreds of people about in the park: playing ball, sitting on benches, skateboarding, walking, running, walking dogs. He was still out, head and legs and tail all stretched outside the confines of his shell. I couldn’t help but think of Tom, and think about the audacity to live beyond the confines of the human experience. The shell protects, defines, humanizes the turtle, but the insistence on basking in the sun outside that shell speaks to the kind of human being I hope to become. I can only hope to live so fully.

I am so inspired by Nancy Slavin who is part of the Chicago Public Schools HR Department. She is so good and doing such amazing work. Watching people make transformative change is so powerful. It makes me believe that change in possible even in hierarchical systems that tend to reward and sustain mediocrity. She described the beginning of her job as feeling like she started as “captain of the titanic,” and yet she still transformed her domain. I like this example. Let me restate that: I love this example. When I’m around leaders like this, I am inspired with every part of my being to actualize my leadership potential. Greatness seems to come from Chicago these days.

I thought my favorite birthday present was going to be the Maureen Dowd column I discovered this morning imagining Sarah Palin’s current dairy. This experience tops that. Happy inspired birthday to me!

Today we met the cohort that is two years ahead of us. They seem so far ahead of us, mostly working as district leaders–some already superintendents and even former superintendents. Perhaps they came in more seasoned than we are now, but perhaps two years from now we will have grown into the leaders they clearly are now.

As I sat in the resource management class (focused on HR this week) our two cohorts are jointly taking at TC this summer, I wondered how much all of this is a self-fulfilling prophecy established by the Organization and Leadership department at TC. To what extent are they district leaders now because the program named them as a cohort ready for the challenges of leadership in urban districts? To what extent will they stay with the work because of the cohort model and because of the training UELP is providing? To what extent do I now (as of 4 hours ago) see the path toward becoming a superintendent as possible and perhaps desirable because of the frame of this program?
I actually realized today that under the right leadership, working in a district could be satisfying work that pushes toward wide scale change. At first, I felt out of place sitting in a classroom where the instructor asked us to frame a vision for how we wanted to manage human resources in our district. This is a level of questioning I have never been exposed to, and I knew at some point in this program, we would begin to shift in this direction. The work we have done in the first two weeks immersing ourselves in the research has felt pleasantly familiar, like an old high school or college buddy you see again after 3 years and realize that you still connect. I’m good at being a graduate student and scholar.
Working alongside more established school leaders this past two weeks has pushed me to feel more comfortable calling myself a leader publicly. I have always seen myself as someone with strong leadership skills, experience, and dispositions, but this is the first time in a while I have actually identified with and embraced the title of leader. When I decided to enter to realm of urban education 13 years ago as an outsider who grew up in a rural homogeneous community, I disassociated with the identity of leader. I knew that I had so much learning to do, so much listening, and so much living. I have been consciously building my practice in a field I care passionately about; I have been pushing myself to become competent and established enough to be on firm ground when I assert that we can and should transform urban systems to be more just and equitable. I finally feel ready to assume a formal leadership role in this field.
I have to trust that I belong with these two cohorts of established principals, executives, district leaders, and superintendents. I remain open to a variety of leadership roles, and today I accepted for the first time that included in the list of possible leadership roles is the title superintendent. Where do I go from here? That’s still up to the NYC job market the opportunities I find through TC. I’m curious to see where this path leads me in the near future. The next two years will likely be largely shaped by UELP’s vision, connections, and requirements, and I look forward to be looking back measuring the likely inevitable exponential growth two years in this program will produce.